ART – At the Palazzo della Cultura in his hometown of Catania, starting 1 December and open until 6 January, you will find the exhibition “Private Collection Imprints of Peace”, which the artist-globetrotter represents with 77 canvases including footprints left by passersby that symbolize birth, while the colors and powders create a three-dimensional effect. The artist, “We must give space to beauty” by Laura Cavallaro

London, Paris, Milan, Cairo, Athens, Iceland, Izmir, Katakolon are only some of the destinations  touched during the travels of Claudio Arezzo di Trifiletti, a nonconformist painter who after ten years of absence returns to exhibit in his hometown, Catania, with the exhibition “Private Collection Imprints of Peace”. A journey around the world seen through 77 paintings, exhibited in a timeless manner and arranged according to a flow of energy. The particularity of Arezzo di Trifiletti’s work is based on the technique which is not only pictorial but above all preparatory; in fact, it places the virgin canvas on streets, on sidewalks and also at the entrance to the former Literary Café where the installation is housed, so that the footprints of those who pass over it can remain etched. At the base of everything, in fact, there is the footprint, which is synonymous with birth and serves as a support for his work. Clear principles that are inspired by quantum physics, religion but above all by the cult for beauty. As the artist recounts during the presentation of the exhibition, which will open its doors on Saturday 1 December and will be open until 6 January 2019: “This experience aims to shake up the visitor and start a series of connections. Above all it will be the presence of children to create tremendous energy”. The Municipality of Catania is sponsoring the event. An excited mayor, Salvo Pogliese, is present at the premier: “I am happy to be here next to Claudio, to whom I have been bound by a relationship of sincere and profound friendship for about twenty-five years. An internationally renowned artist whose path I followed from a distance, this is why today it is an honor for me and for the Councilor for Culture Barbara Mirabella to welcome him to Palazzo della Cultura.” Two rooms full of dense canvases in which the brilliance of acrylics and lines that create elongated and surreal shapes spring up to the eyes. It is a contemporary painting that recalls certain works by Matisse, but it is above all the way in which the brush stroke is laid out, in which the powders are mixed with the colors. The impression is that the overlapping layers are all visible and in some cases the feeling is that the picture is three-dimensional. It is the optical game that is created in the Eiffel Tower – Paris where the black brushstrokes on a red background give the impression that the painting is popping out. Next to the large panels, on paper bags, in which usually fruit is placed, are listed the names of the cities. It is an original way to describe the path that is well matched with Arezzo by Trifiletti’s commitment to the environment. In fact, he advocates a Cathedral of Recycling to be built on the Piana di Catania made with plastic and glass bottles: “I am careful of unrecycable waste, I create compost to use for the land of the future. We must awaken consciences and show ourselves attentive to these issues because the Earth is as alive as our volcano Etna.” A wish but above all a commitment to the land that must be known and protected in depth because it is the greatest good we possess. A radical change of lifestyle that has seen him transform from a young PR at a nightclub into a 360 degree artist, even if he tells us sitting on one of his canvases, that art and painting have always been in his DNA. Scion of a family of architects for several generations, he began painting at the age of four, when he made his first painting of a solitary man on a boat. A strong passion that we can still read in his eyes: “At the base of my work there are many sacrifices, without permission I spread these sheets around the cities with the risk of being arrested, especially in the Middle East, but it was done for a reason. After the attack on the Twin Towers, I felt the need to give my contribution to the world, an opportunity that came when I arrived in New York for an exhibition. There I collected the dust from the sidewalks of the city and I started the project that aims to respect Maya, the Earth. The imprint I refer to, which gives the title to the work, is the footprint which we carry with us from birth, which springs from the symbiosis with the world and which I nourish daily. In fact, I have been living in the countryside for a long time, where I have reached a balance with nature”. Arezzo di Trifiletti does not hide from us that some time ago in London he was offered a considerable sum to sell the entire collection, a proposal that he refused without second thoughts because he did not want his art to be sold and adds: “Today on this occasion I am giving myself. We are destined to be born and die, for the only capital we have is what we leave behind. That’s why I put the installation at the entrance “Give me space”, because we need to give space to beauty. Looking beyond we have the opportunity to see beautiful things and bad ones. I act as a sponge, I try to filter only beauty and I hope that others can grasp it, especially children”. Asked if there is a painter who has inspired him, he immediately responds that the first ever is the Eternal Father but also Modigliani, who struck him just at the age of twelve years old. “His works have allowed me – he says – to understand space and the way in which the shapes stretched up to the sky”. If Picasso explained dimension, Claudio Arezzo di Trifiletti with his painting linked to the elements, to dreams, wants to interpret the fifth, those of the energies with which each one can nourish his own spiritual body. The materials on which he works are innumerable; not only the waste that in this way find new life as a piece of wood abandoned and used to make a tribute to Pope Francis, but also clay that he leaves raw and paints with gold, the same color that we find in the Vatican painting, the only one not to have figures out of a form of respect. The mystical dimension is present together with the religious one in “Saint Lucia” where the concentric circles embrace and conclude the pictorial experience. The paintings that convey a sense of disquiet are those linked to the great metropolises like London and Paris, unlike the lagoon cities that transmit a sense of calm and peace. The paintings that refer to Venice are full of soft colors and intense nuances, with images that intertwine as threads. This is an experience that must be lived in a subjective way through a personal listening to themselves and to the works, for this we do not understand the need to put next to the paintings a qr-code, among other things not present in the rooms, still under construction. Too bad even for the video, although well edited and with a stimulating soundtrack, made by the students of the Academy of Fine Arts in which Arezzo di Trifiletti paints his paintings among the streets of the market of Catania and Aci Castello, because of bad audio you could not hear the story of the artistic excursus. There is still a few hours before the debut and we are sure that these minor inconveniences can easily be solved, but for the rest a great trip awaits you. 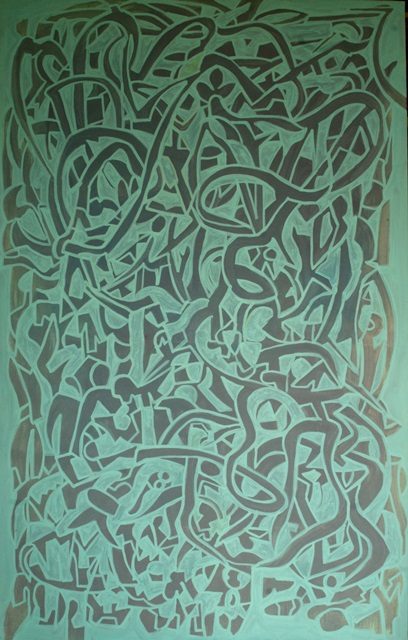